Home > Cataracts > Is There a Link between Cataracts and Depression in Older Patients? 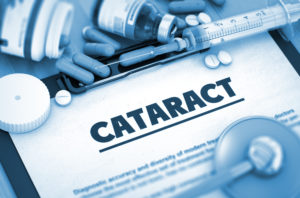 Cataracts affect nearly 22 million Americans age 40 and older, according to the American Academy of Ophthalmology. And, according to Chinese researchers Haifang Wang, Hong-Peng Sun, Pei Wang, Yong Xu, and Chen-Wei Pan, older adults with cataracts are more likely to have symptoms of depression. The study, “Cataract and Depressive Symptoms among Older Chinese Adults” was published in the December issue of Optometry and Vision Science, the official journal of the American Academy of Optometry.

“We aimed to assess the association of age-related cataract, a common eye condition in older people, with the presence of depressive symptoms in a community-based cohort of Chinese adults after controlling for a wide range of confounders,” write the researchers.

The team conducted a community-based survey of 4,611 Chinese adults aged 60 years or older, measuring depressive symptoms in study participants using the 9-item Patient Health Questionnaire (PHQ-9) depression scale. The presence of depressive symptoms was defined as a PHQ-9 score between five and 27, with eight percent of subjects scoring in that range. Symptoms of depression were more common in women (11 percent) than men (five percent), more common in older adults, and more common (33 percent) when cataracts were present. After all other factors were taken into account, cataracts explained 14 percent of the variation in depression risk.

“[O]ur study sheds further light on the complex relationship between aging, vision loss, cataract, and depression and suggests that there may be a role for cataract surgery in improving mental health in the elderly,” write the researchers.

In it’s simplest form, cataract surgery involves removing the cloudy lens and replacing it with a crystal clear lens implant, called an intraocular lens (IOL). Under local anesthesia, a small incision is made on in the edge of the cornea and high frequency ultrasound vibrations gently dissolve the natural lens into small pieces. These fragments are removed and replaced with the IOL. The thin, posterior layers of the lens, called the lens capsule, is left behind.

Today, more than a million IOLs are implanted every year in the United States alone.

“We should also consider the broader impact that vision loss may have on mental health and well-being,” says Michael Twa, OD, PhD, FAAO, Editor-in-Chief of Optometry and Vision Science. “As a next step, it would be important to know if the associated depression in older adults is reversible following the restoration of vision after cataract surgery.”

The Anne Arundel Eye Center (AAEC) is a regional leader in the diagnosis and treatment of glaucoma and cataracts. A consultation with board certified ophthalmologist Dr. Samuel Boles will help guide you through the treatment process and help you determine the best course of action.

Dr. Boles utilizes the LenSx® Laser, the most technologically advanced option for cataract patients today, to create a cataract surgery that’s 100% unique to each patient.

Staffed by caring and knowledgeable professionals, AAEC’s state-of-the-art treatment center is dedicated to making the best eye care accessible to everyone.

If you have any questions, please contact Dr. Samuel Boles, Dr. Nicole Kershner Regis, Dr. Kathryn Turner, and the eye care specialists here at AAEC by calling 410-224-2010. AAEC is staffed by caring and knowledgeable professionals who will help guide you on your healing journey.