Home > Glaucoma > Can a Healthy Diet Decrease My Risk of Glaucoma?

The term glaucoma refers to a group of eye conditions affecting over 3 million Americans. Glaucoma is the result of increased intraocular eye pressure (IOP) and damage the optic nerve, the nerve that carries visual information from the eye to the brain. Eye pressure is measured in millimeters of mercury (mm Hg), and normal eye pressure falls between 12 and 21 mm Hg. Anything above 21 is considered elevated.

We are all at risk of glaucoma, and certain groups are at a higher risk than others. But this doesn’t mean that we have to roll over and just see what happens. There are steps you can take to lower your risk for glaucoma and protect your vision. For instance, researchers at Brigham Women’s Hospital have found that a healthy diet with a high intake of leafy green vegetables could reduce the risk of primary open-angle glaucoma, or POAG, by as much as 30 percent. 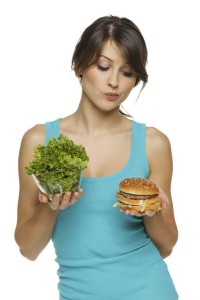 “We found those consuming the most green leafy vegetables had a 20 to 30 percent lower risk of glaucoma,” said study leader Jae Kang, an assistant professor of medicine at Brigham and Women’s Hospital and Harvard Medical School in Boston.

What is Primary Open-Angle Glaucoma?

As you may recall if you are a regular visitor to our blog, a few weeks back we discussed narrow angle glaucoma, one of the rarer forms of glaucoma, affecting nearly 500,000 Americans. POAG, meanwhile, is the most common form of glaucoma, affecting approximately one percent of all Americans. POAG is a progressive condition resulting in damage to the optic nerve as fluid builds up in the front of the eye. Some believe POAG to be caused by a structural defect of the eye’s drainage system. This prevents fluid from moving freely and causes increased IOP. Think about a clogged pipe. Everything may look okay on the outside, but there is an issue under the surface, an issue that could cause a lot of problems if not diagnosed and rectified early. However, POAG is painless and presents no symptoms, meaning a person can lose as 40% of his or her vision without even realizing. This also means that annual eye exams are a must.

Vision loss from glaucoma is irreversible, but glaucoma can be managed if detected early. With early detection and vigilant treatment, your eye doctor – optometrist or ophthalmologist – can preserve vision 95% of the time or more. So, when was your last eye exam?

Reducing the Risk of Glaucoma

“In glaucoma, we think there is an impairment of blood flow to the optic nerve,” said Kang. “And an important factor that regulates blood flow to the eye is a substance called nitric oxide. When you consume the higher amount of green leafy vegetables, you have greater levels of nitric oxide in your body.”

The Anne Arundel Eye Center, led by board certified ophthalmologist Dr. Samuel Boles, is a regional leader in the diagnosis and treatment of glaucoma. Staffed by caring and knowledgeable professionals, AAEC’s state-of-the-art treatment center is dedicated to making the best eye care accessible to everyone.

If you have any questions, please contact Dr. Samuel Boles, Dr. Nicole Kershner, Dr. Kathryn Turner, and the eye care specialists here at AAEC by calling 410-224-2010. AAEC is staffed by caring and knowledgeable professionals who will help guide you on your healing journey.