According to a study published in Ophthalmology, the journal of the American Academy of Ophthalmology, obstructive sleep apnea (OSA) is a risk factor for glaucoma.

What is Obstructive Sleep Apnea?

Sleep apnea is a fairly common sleep disorder in which breathing stops and starts one or several times during sleep. OSA, meanwhile, is the most common form of sleep apnea. It occurs when the throat muscles intermittently relax and block the airway during sleep, causing breathing to stop for up to two minutes. 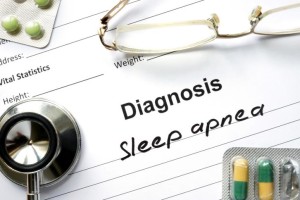 According to researchers at Taipei Medical University, obstructive sleep apnea is an independent risk factor for open angle glaucoma.

According to the National Sleep Foundation, nearly 12 million Americans suffer from this common sleep disorder.

Anyone can develop obstructive sleep apnea. However, the condition most commonly affects middle-aged and overweight adults.

How Are Obstructive Sleep Apnea and Glaucoma Connected?

According to researchers at Taipei Medical University, obstructive sleep apnea is an independent risk factor for open angle glaucoma. This retrospective study using a nationwide, population-based dataset found that those diagnosed with OSA were 1.67 times more likely to develop glaucoma within five years after diagnosis than those without the sleep disorder.

“We hope that this study encourages clinicians to alert obstructive sleep apnea patients of the associations between obstructive sleep apnea and open-angle glaucoma as a means of raising the issue and encouraging treatment of those who need it,” wrote the authors of the study, led by Herng-Ching Lin, Ph.D., of the College of Medical Science and Technology at Taipei Medical University.

Early detection and vigilant treatment are still the best ways to prevent major vision loss from glaucoma. So, when was your last eye exam? With diligent treatment vision can be preserved 95% of the time or more using various treatment options: medication, lasers, or surgery.

Led by board certified ophthalmologist Dr. Samuel Boles the Anne Arundel Eye Center (AAEC)  is a regional leader in the diagnosis and treatment of glaucoma. We always welcomes new patients. AAEC offers complete ophthalmic exams as well as diagnostic pre and post-surgical eye care in our state-of-the-art treatment center located in Annapolis, Maryland.

If you have any questions, please contact Dr. Boles, Dr. Kathryn Gurganus Turner, and the eye care specialists here at AAEC by calling 410-224-2010. AAEC is staffed by caring and knowledgeable professionals who will help guide you on your healing journey.